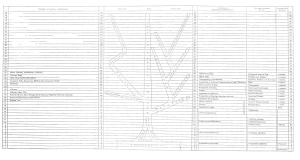 This chart appeared in “Mental Evolution in Animals” “Mental Evolution in Man”, both published in the 1880s; Romanes depicts the emotional and cognitive development starting with unicellular. On the left, at level 21, Romanes lists “Jealousy. Anger and Play.” On the right side, at level 28 we see “Anthropoid apes and dogs” at the same level of a 15 month human.

Romanes’ shows some prescience but goes overboard with the wild speculations:

It will be observed on turning to the diagram that I attribute to animals the following emotions, which I name in the probable order of their historical development:—Surprise, Fear, Sexual and Parental Affection, Social Feelings, Pugnacity, Industry, Curiosity, Jealousy, Anger, Play, Affection, Sympathy, Emulation, Pride, Resentment, Esthetic Love of Ornament, Terror, Grief, Hate, Cruelty, Benevolence, Revenge, Rage, Shame, Remorse, Deceit, Ludicrous. This list, which leaves many of the human emotions without mention, exhausts all the emotions of which I have found any evidence in the psychology of animals. – Mental Evolution in Animals (p.341)

I offer this chart as a little historical backdrop to the recent and well publicized study suggesting dogs are capable of jealousy. Even though Romanes chart was based on anecdotes, it’s hard not notice the broad brushstrokes are mostly correct.

We’ve mostly forgotten Romanes and his chart because his contemporaries rejected the idea animal emotions could be scientifically examined; they eventually won out and it took scientists over 50 years before they were willing to take a second look at animal emotions, though this time around with much greater rigor.

The study on dog jealousy has received plenty of press, appearing in ScienceDaily, Live Science, newspapers and in a number of blogs including Coren’s Canine Corner, and Bekoff’s Animal Emotions.

In a recent post, Lee Charles Kelley – supplicant to the Clueless Idiot (CI) Kevin Behan – attacks the findings, Coren’s and Bekoff’s posts, and uses them all as a launching pad to also attack evolution.

From what I can tell, he didn’t even read the paper in question because while Kelley writes:

The current findings add support to the emerging view that there is a primordial form of jealousy.

dogs do appear to feel jealousy and respond to it in much the same way that human children do.

And Bekoff (on the negation of jealousy in dogs):

existing data do not support the claim that they don’t.

Nobody says proof. As every scientist knows, ‘proof’ is for mathematicians and alcohol.

Kelley then simultaneously attacks positive training and with a single hand-wave dismisses the study:

I’ve seen this kind of behavior a lot in my training practice in New York City. It’s really just a simple attachment disorder, one that’s usually found in dogs who’ve been given too much “positive” attention by their owners. – LC Kelley

From here, Kelley goes on to attack the idea of evolutionary continuity by suggesting Coren and Bekoff (and really everybody else) have a “mistaken idea about Darwin’s thoughts on the differences in consciousness between humans and animals.” Kelly seems eager to ignore evolutionary continuity is necessary consequence of evolution and even without Darwin, it would remain a fact – we didn’t need Darwin to tell us something obvious.

Kelley quotemines Darwin to make it seem like Darwin thought there was a huge gap between humans and animals when the opposite is true. Darwin’s writing style often invites quote-mining; there is even a webpage dedicated to the anti-evolution quotemines.

What Kelley quotes vs What Darwin wrote.

Darwin himself paints a different picture. Chapter 3 of The Descent of Man starts with this:

Everyone has seen how jealous a dog is of his master’s affection, if lavished on any other creature; and I have observed the same fact with monkeys. This shews that animals not only love, but have desire to beloved. Animals manifestly feel emulation. They love approbation or praise; and a dog carrying a basket for his master exhibits in a high degree self-complacency or pride. There can, I think, be no doubt that a dog feels shame, as distinct from fear, and something very like modesty when begging too often for food. A great dog scorns the snarling of a little dog, and this may be called magnanimity.

It may be freely admitted that no animal is self-conscious, if by this term is implied that he reflects on such points as whence he comes or whither he will go, or what is life and death, and so forth. But how can we feel sure that an old dog with an excellent memory and some power of imagination, as shown by his dreams, never reflects on his past pleasures or pains in the chase? And this would be a form of self-consciousness.”

Besides love and sympathy, animals exhibit other qualities connected with the social instincts, which in us would be called moral; and I agree with Agassiz that dogs possess something very like a conscience. . . .

Kelley makes one more major and common mistake regarding evolution, he holds the mistaken belief that humans are evolutionary more advanced, at a higher stage of evolution; it’s based on the misconception that evolution means progress (Johnson). Kelley thinks evolution moves forward, more than that, he thinks evolution moved forward TO US.

Of course this means that there actually is an evolutionary continuity, it just runs backwards to the way that Bekoff and Coren seem to believe it does. – LC Kelley

The talk of ‘higher’ and lower’ eventually leads to the conclusion that man is the ‘highest’ and all other species are ‘lower’. Kelley links to Bekoff’s article, on the fallacy of human exceptionalism but looks like the point went right over his head. We can talk about continuity back in time but not backwards in development.

In an article from the open access journal, Evolution: Education and Outreach, TR Gregory makes the same point:

Not surprisingly, humans typically are (self-)designated as the “highest” organisms, with other living species ranked as higher or lower on the “evolutionary scale” according to how similar they are to this particular terminal node on the phylogeny of animals.

And Gregory points to a deeper problem:

As many prominent authors have noted, there is no scientifically defensible basis on which to rank living species in this way, regardless of how interesting or unique some aspect of their biology may be to human observers. This error does not so much reflect a specific misunderstanding of phylogenetic diagrams per se but a failure to grasp the very concept of common descent.

“A failure to grasp the very concept of common descent,” pretty much nails it.

Behan adds some nonsense about energy in cheer-leading support of Kelley’s ignorance and writes that “such experiments generally demonstrate the opposite of what they are interpreted to mean by the mainstream.” He really means that “if results don’t confirm my prior beliefs then it’s wrong.”

Lesson being: fiction writers and mystics don’t make good sources if you want to learn about evolution…or dogs.

The CI wrote a post called “The Unsure Unknown Scientist;” he meant it as an insult; the author is scientifically illiterate and is ignorant of epistemology so he doesn’t know why it is actually a compliment.

Science is the outcome of being prepared to live without certainty and therefore a mark of maturity. It embraces doubt and loose ends.” — A. C. Grayling

When the CI encounters new information it is processed through that dogmatic certainty and it’s perverted to fit the dogma or rejected because he can’t make it fit. And so he learns nothing.

One unerring mark of the love of truth, is not entertaining any proposition with greater assurance than the proofs it is built upon will warrant” — John Locke, 1690

Unsure? Yes I’m unsure of many things, it is why I possess the ability to learn and adapt to new ideas. Uncertainty frightens the CI, he has to hold on to his lies. Uncertainty just means we need more research.

Prior to this my paper I did not negate the possibility dogs felt jealousy or something like it. Because I didn’t feel an unjustified certainty about the subject, this study isn’t a threat to my dogma (ain’t got one) and I can adjust to this new fact without breaking stride. One benefit of not being shackled by ignorant certitude.

I have approximate answers and possible beliefs and different degrees of certainty about different things, but I’m not absolutely sure of anything, and many things I don’t know anything about, such as whether it means anything to ask why we’re here, and what the question might mean. I might think about it a little bit, but if I can’t figure it out, then I go on to something else. But I don’t have to know an answer…. I don’t feel frightened by not knowing things, by being lost in the mysterious universe without having any purpose, which is the way it really is, as far as I can tell, possibly. It doesn’t frighten me. — Richard Feynman (Physics Nobel Prize, 1965)

Darwin, C (1871) The descent of man, and selection in relation to sex. London: John Murray.

Science of Dogs blog by https://dogbehaviorscience.wordpress.com is licensed under a Creative Commons Attribution-NonCommercial-ShareAlike 3.0 Unported License.